I got Lasik last month and it has changed my life. If you’re interested in Lasik read here to learn all about how I finally made the decision!

This is not a paid collaboration at all, just based on personal experience. I chose my Lasik center, paid for it all, and here are my fully honest results! 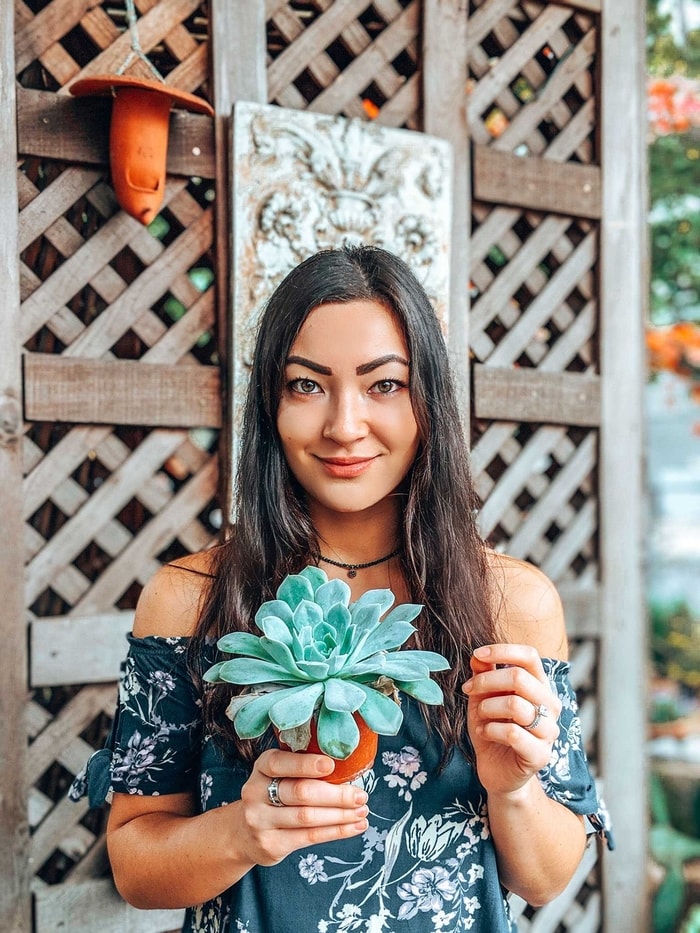 My path to Lasik

Harrison and I have both had glasses since the third grade. I finally got contacts in seventh grade, and have worn them ever since.

Up until last year, when I randomly became allergic to my contacts.

The condition I had was called GPC, short for Giant Papillary Conjunctivitis. From my understanding of GPC, I had little bumps underneath my top eyelids caused by inflammation from my contacts. When wearing contacts, I could feel them- they felt thick and would sometimes slide around.

The normal remedy is prescribing daily contacts- but I was already using dailies. I also had Lotemax, a prescription gel that I’d apply to my eyelids at night, which was expensive and a hassle to use.

There was also Blink for Contacts, an OTC drop that lubricates your contacts, but these drops still weren’t all that helpful.

On top of that, I would develop myebomian cysts, a sort of calcium deposit, underneath my eyelids if my contacts irritated my eyes. This would happen once every few months, and each time it felt like there was a giant grain of sand each time I blinked or closed my eyes (yes, that made sleeping at night very difficult). These would have to be removed surgically by the eye doctor, leaving me with a hefty bill each time.

So in the end, I switched to glasses and only wore contacts on the weekends. But my glasses were uncomfortable and my contacts irritated my eyes.

After dealing with all of that for a year and a half, I finally decided to look into Lasik. Harrison had always wanted Lasik, but we figured it just wasn’t financially feasible.

But I went in for a consultation, and after learning more about it, I was sold.

I booked Lasik appointments for both Harrison and me!

(Here we are post-Lasik and oh-so-happy!! Read on to learn about the redness in our eyes!) 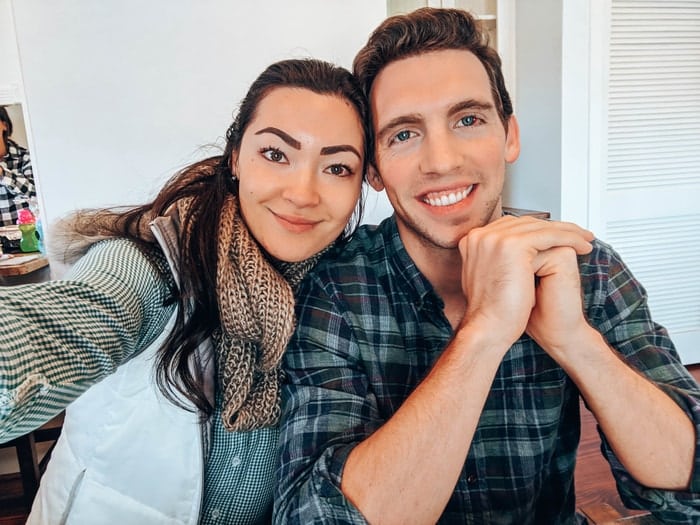 Why was I sold on it?

First and foremost: the cost was way better than I thought. At the Carter Eye Center in Dallas, TX (which I chose because of the reviews and the location), it ended up being about 3,800 per person.

Yes that is a lot if you’re looking at it as a one time payment. But we went with Care Credit, a medical payment platform that allows you to do a 2 year payment plan with zero interest. For Harrison and me combined, that’s only about $305 a month. Totally doable.

Next, the Carter Eye Center itself.

Dr. Carter has done over 70,000 Lasik surgeries, which definitely boosted my confidence in his abilities. At the consultation you actually get to speak with Dr. Carter, which made it feel more personal, and showed that he truly cared about his patients.

People at the Carter Eye Center were really kind. Bobby was our patient consultant, the guy who we planned everything with. He also did our Care Credit application so that we didn’t even have to do it ourselves. He really made everything flow seamlessly.

So we scheduled our appointments a week apart (mine on November 9th, and Harrisons on November 17th).

My appointment was at 2PM.

I arrived and met with Bobby where you sign the standard medical forms and where he gave me a bag of everything I’d need- my Oasis tears, night goggles (which protect your eyes at night), and extra tape for the goggles.

John, a tech at the Carter Eye Center, led me to a dimly lit room with four lounge chairs in it- the relaxation room.

In the room John gave me a Valium to take and then periodically gave me steroid eye drops.

After about 30 minutes or so, once the Valium had kicked in, he brought me into the laser suite, where the I’d have the surgery. (John took some photos for me pre-surgery.) 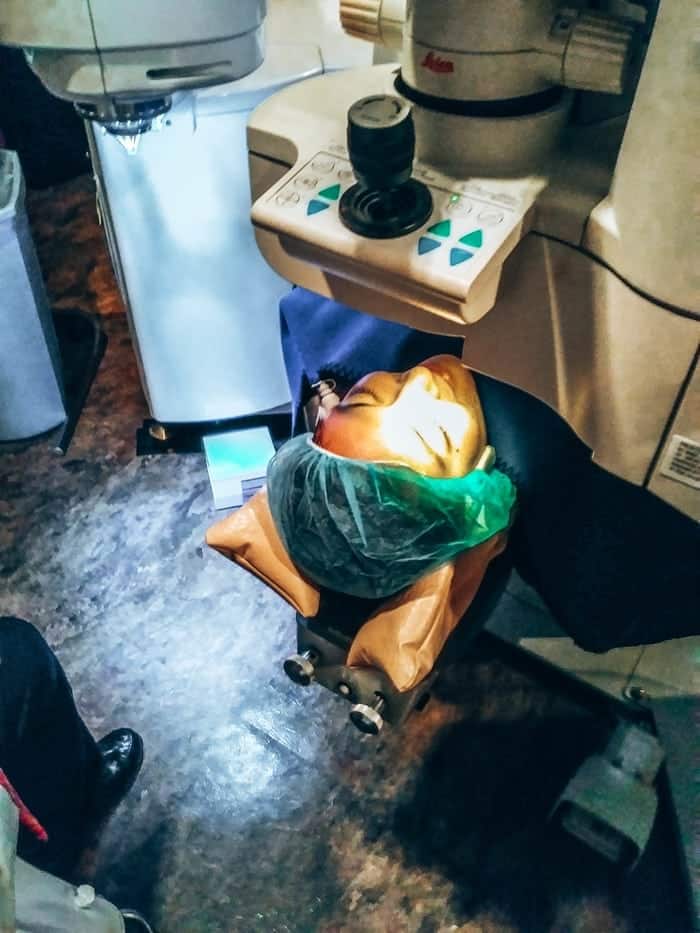 In the laser suite, you’re situated between two machines. The first one cuts the flap in your eye and the second one corrects your vision. (That’s the extent of my graphic descriptions!).

But first, you get numbing eye drops. Then, they show you what you’ll see when the laser is pointing at your eye.

Finally it is time for the surgery, which lasts all of a minute. Your eyelids are taped open so that you don’t blink, and your only task is to stare directly into the red laser.

After both eyes are done, you’ll sit up and be led to an examination room.

That’s where Dr. Carter checked my eyes and inserted punctal plugs– tiny plugs that go into your tear duct in each eye that help with dry eyes. They stay in there for months and you can’t even feel them! Punctal plugs are his dry eye treatment of choice– other doctors use prescription drops, but I definitely prefer the plugs.

Then he puts your goggles on (they get taped on) to protect from accidentally rubbing your eyes.

And then I was done for the day! Harrison picked me up, and I went home and slept.

They recommend sleeping for as long as you can and definitely keeping your eyes closed for the rest of the day.

You might think it’s hard keeping your eyes shut, but it’s like your brain knows to keep them shut- you have no desire to open them!

So I took a nap and actually woke up after 30 minutes and quickly realized why you are supposed to stay asleep- because once the numbing drops wear off, your eyes do hurt a ton.

I’ve heard mixed feedback on whether or not you’re supposed to feel any pain, but I sure did. It only lasted about 30 minutes, until I was able to fall back asleep again. Then when I woke up two hours later, they felt so much better.

I listened to a couple of Seinfeld episodes, ate dinner, and then went to sleep for the night. 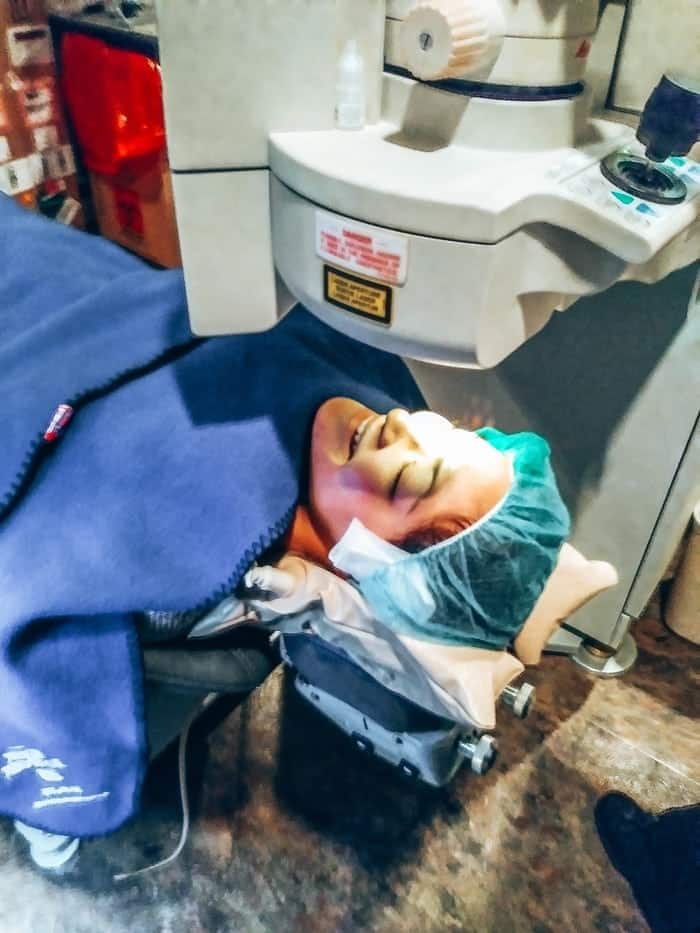 The next morning I was so scared to open my eyes. I tend to be a really anxious person, and was so afraid of not being able to see (irrational fear). After removing my goggles, I quickly put in my drops, and took a look around.

I could see! Sure, some things were a bit blurry, but I knew in advance that that was normal. John also had warned me of gritty-ness, which I did feel, but knew was normal as well.

The one thing I didn’t expect was how red the whites of my eyes were! Not all over, just where the suction had kept my eye in place.

Redness definitely varies from person to person, but mine were pretty strikingly red.

This photo was taken two days after my lasik: 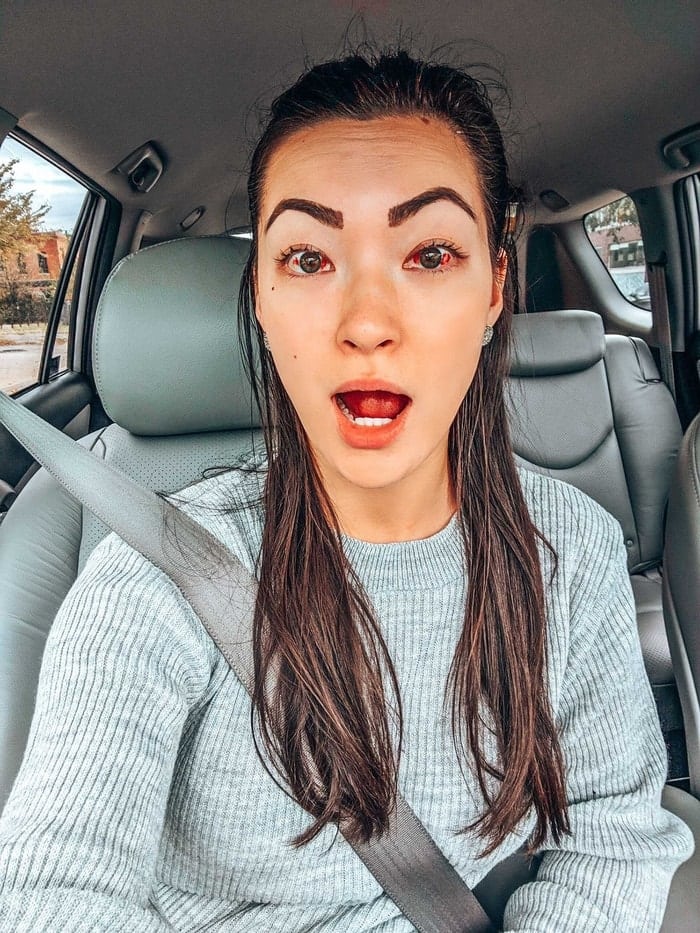 I went to my one-day follow up appointment, which went great. I was already seeing 20-20, though one (normal) issue that I had was that lights appeared to glow. (Also, light sensitivity and poor night vision are also completely normal.)

The redness took about a month to go away completely.

My eyes still get dry at night, but they are still healing 🙂 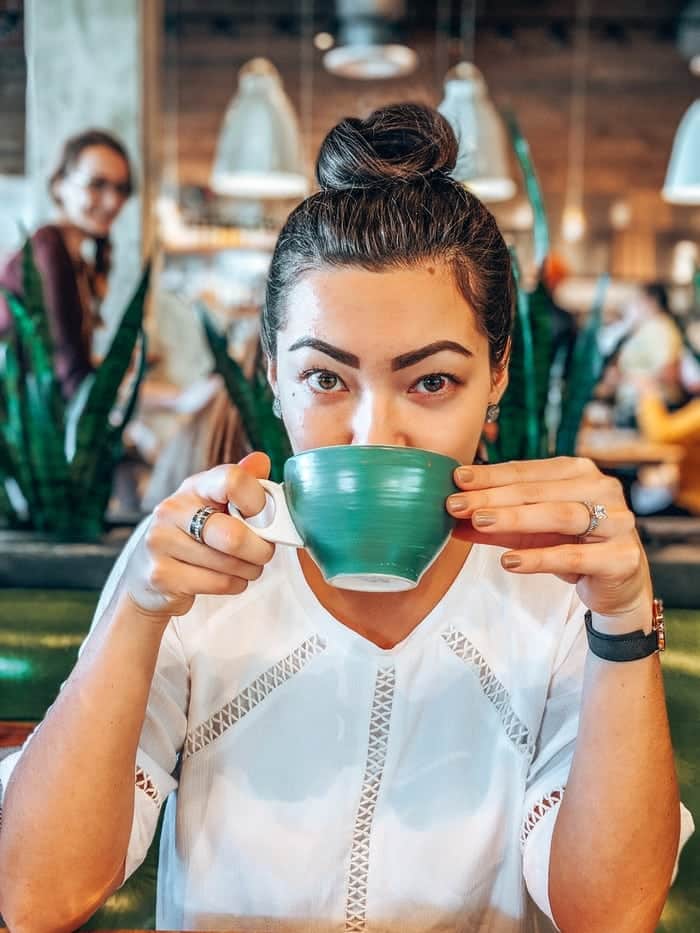 Questions I had (and answers!)

What do I need to know about going for a consultation?

I just called the Carter Eye Center on a day when they could fit me in for a consultation. One thing to note is that you can’t wear contacts for three days prior to a consultation. They will dilate your eyes, but you are able to drive with the special eye shade glasses they give you. Your eyes will be dilated for over 24 hours, which is normal. Afterwards, I just wore sunglasses whenever I could 🙂

How long is the recovery time?

You can actually go to work the next day, though I took the day off to recover.

How long will the whites of my eyes have these red bruises?

It needs time to heal, just like any bruising. The doctor told me it would take a few weeks. Most of the redness was gone after three weeks, but it was completely gone after a month and a week.

How long do I need to put prescription drops in?

Until you run out of the medication. I had three different drops: two antibiotics and Oasis Tears. The antibiotics you apply four times a day for two weeks or until you run out. The tears you do once an hour until you no longer need them. As I write this, six weeks later, I just use my tears right when I wake up and sometimes right before bed.

Are there special things I need to do day-of?

How long will I be at the center for surgery?

My total time there was about two hours. You’re only in the laser suite for about fifteen minutes. The actual surgery lasted about 30 seconds on each eye.

What can I expect post-surgery?

Harrison just went to his one month check up (mine is tomorrow since I had to reschedule) and he is perfectly 20-20! I think my vision is perfect as well, but I guess I’ll know for sure tomorrow!

The redness is gone from both of our eyes, and we are two very happy campers. 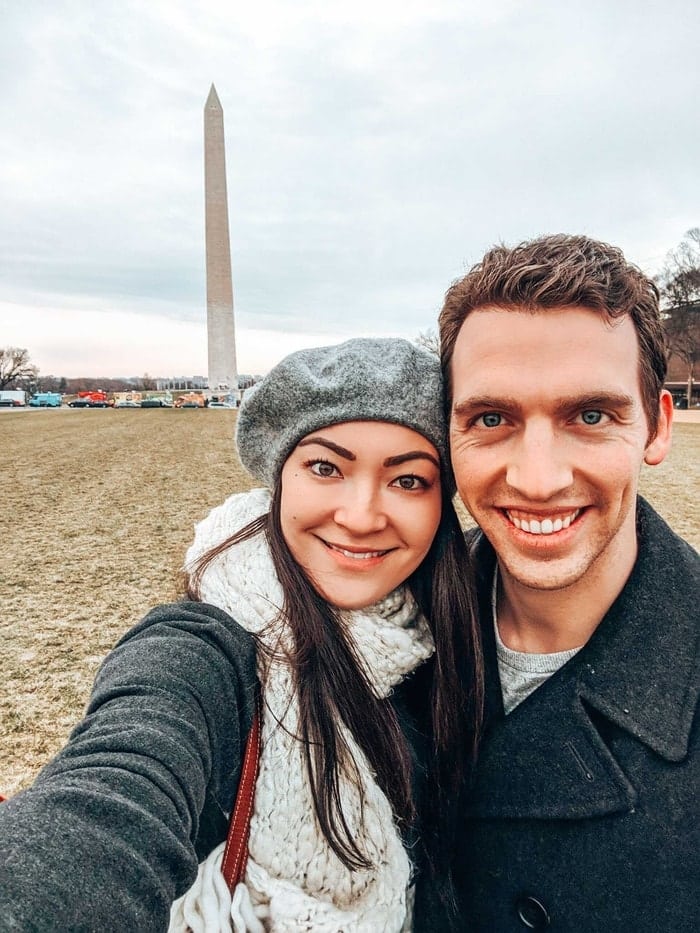 It has already been really life changing for us.

It’s quite amazing being able to see right when you wake up. And when it comes to travel, it is a godsend. We no longer have to remember to pack contacts, contact solution, glasses, and glasses cases. I don’t have to take my glasses off when I want to sleep on the plane. And not having to worry about putting contacts in and taking them out is so wonderful. And we finally get to make great use of our sunglasses!! 🙂

If you have any questions about Lasik, comment them below! 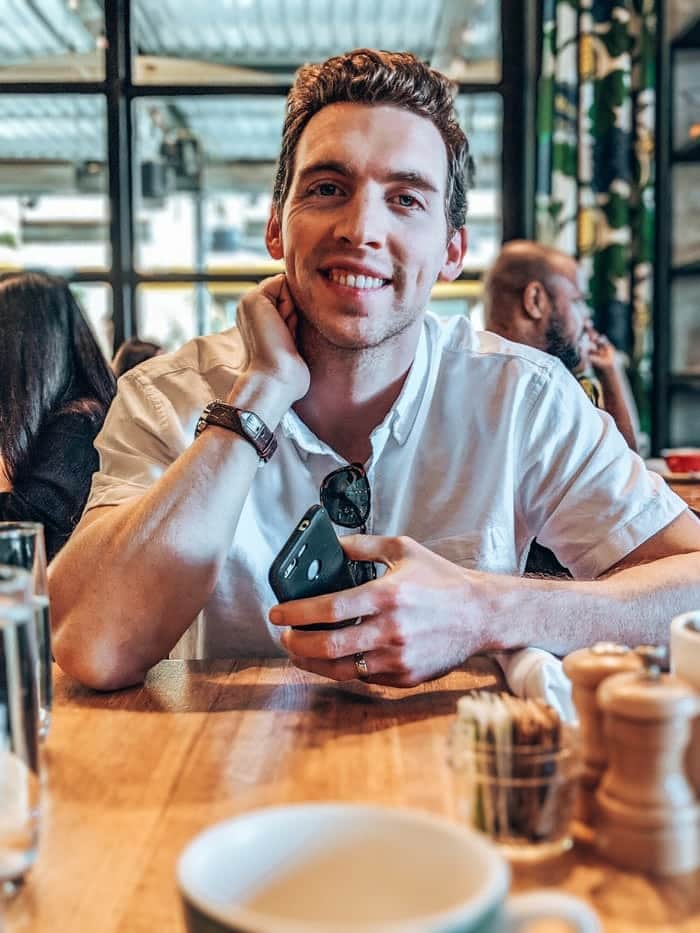 This site uses Akismet to reduce spam. Learn how your comment data is processed.

Hi, I’m Jasmine! I’m a nature-obsessed, beauty-finding, Jesus-loving dreamer with a serious case of wanderlust. I’ve quit my 9-5 to become a travel blogger, and my goal is to show others how they can too! And if you love your full time job, stick around for travel tips and inspiration! Thanks for following along on my adventures! 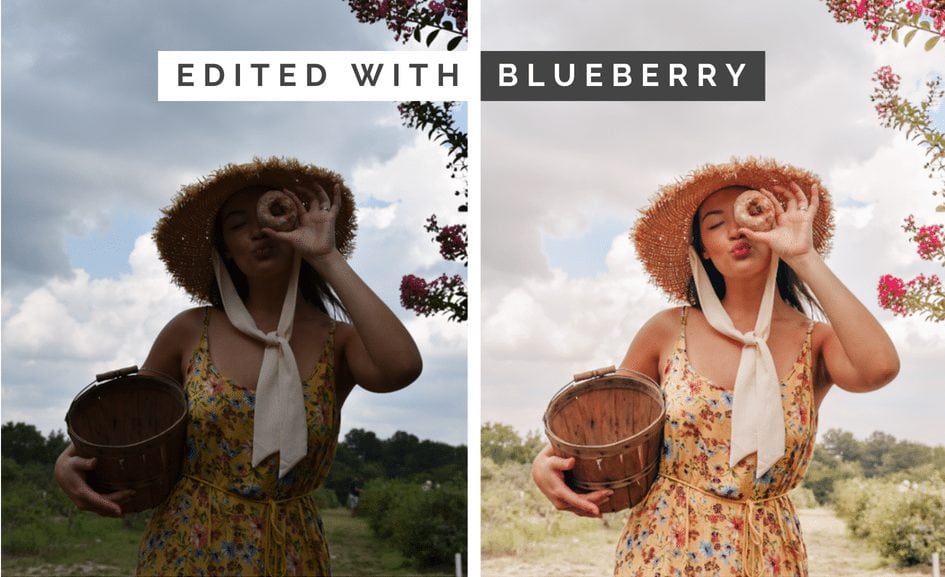 If you're ready to share your ideas, stories, and adventures with others, check out my post on how to start a blog. It has all of the logistics on how exactly to create your own website!

No Sunday scaries and only these Monday blues here

Heading on another #southweststorytellers trip tom

Don't mind me, I'll just be over here making a big

What are your new years resolutions? 😄 GIVEAWAY

Found some pretty stairs and was very happy about

What would you prefer... A few week long trips a y

What did your Saturday look like? 😄 This was ou

Hello friends! FYI, most product links on my site are affiliate links, which means that I may earn a commission from advertising or affiliate programs. This doesn’t raise prices- it sometimes may actually lower them! Thanks for supporting my blog by purchasing through these links!

Subscribe to my monthly newsletter for all of my travel updates and blogging/influencer tips!

Heading on another #southweststorytellers trip tom

Don't mind me, I'll just be over here making a big

What are your new years resolutions? 😄 GIVEAWAY

Found some pretty stairs and was very happy about